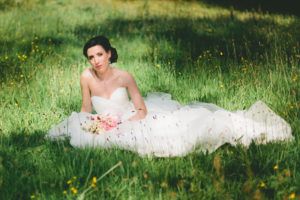 One of the aspects of my job here at Barnabrow Country House that I enjoy most, as I show off the estate to those considering it for their wedding, is how it puts me in contact with young, unencumbered couples abreast with the latest trends.

I am informed by them and feel ‘on-trend’. They are enjoying a moment in their lives when they have opportunity to become selective in a most cognisant way. The second most fascinating aspect of this bird’s eye view is the glimpse that it provides for me of the methods they deploy to achieve their ambitions; I can observe the evolving family dynamics and the political wrangling that occurs between the millennial generation and their not-quite-so-traditional parents.

In my earliest days in the business, almost two decades ago and at a time of relative plenty, the wedding played out along more predictable fault lines – most of the negotiations happening between the bride, her sisters and her parents. Indeed, the men involved, the groom and the father had a limited role: the former was expected to agree with whatever the bride wished for (and he usually did) and the latter to produce the cheque book at the appropriate time; his principal cost was likely to be the dinner of ‘Beef or Salmon’. In those pre-web days, before Pinterest,

One Fab Day-style websites and social media communications, experience was restricted to previous family weddings; novel ideas were thin on the ground. Décor was limited to what the florist or the venue supplied. Imaginations were less exercised – they were simpler times.

Yet, as the boom intensified, money became less and less of an object. Suppliers were hired – wedding planners, florists, decorators, fountains of chocolate and photo-ops with attitude were created – all the while the champagne flowed. Honeymoons were so so exotic taking in tropical sun-drenched islands in unpronounceable corners of the planet but often combined with a Sherpa-guided trek up the nearby or even distant peaks. And Daddy produced the cheques.

Austerity changed everything. Often it was the parents who were hit hardest – wedding funds disappeared with plummeting bank shares. Couples had no choice but to reassess. The old adages applied and necessity became the mother of invention. Home-made became the new black: hand-baked cakes, garden picked flowers, and skills at crafts and efforts at calligraphy enjoyed a renaissance. Attics were emptied: vintage gems began to grace the tables at Barnabrow and 1950s wedding dresses were donned by the Brides who sat at them.  Prosecco that started as a trickle, became a torrent as Champagne disappeared from the Irish map.

All this effort engaged the families in research and discussion and negotiation. A new assertiveness and independence was born. Out with tradition and its formalities – the payer, no longer the Dad, piped the tune. Parents, who could recall their own travails at the hands of family expectations/demands, are more willing to allow greater leverage to their offspring. Grooms, who were brought up with permission to express their creative side, played their part in the planning. And certainly the communications of the World Wide Web provided inspiration.

The ‘grand tour’, that couples make as a rite of passage these days or the enforced emigration that they have experienced, created an ultimately more sophisticated palate when it comes to food. So many describe themselves as ‘foodies’ – this being part of the reason why Barnabrow attracts them. Once again tradition is dispatched. Instead of four-hour long, four-course meals we have ‘standing –up’ weddings where the guests eat without cutlery. Relaxed informal, family-style Food-To-Share platters form our most popular wedding menus; even BBQs have occasionally been the fare of choice. Table plans are discarded in favour of a cosier squishing up together in willy-nilly fashion.

A statistic that surprised me recently was that fourteen of the last twenty couples who booked with us were opting for a Civil Ceremony rather than a church wedding; descriptions of the practises of humanists and spiritualists are the order of the day amongst our staff. All of this is occurring with the parents blessing – and no pun is intended. Ceremonies that have taken place outdoors in our Fairy Grove have sometimes seated guests on straw bales while Hare Krishna bands rather than Scottish Pipers have heralded the Bride and Grooms’ entrance.

It seems to me, from my unique perch, that this experienced, sophisticated, thoughtful and well-honed-in-research generation of slightly older couples has learnt the art of negotiating its way through the pitfalls of family expectations and demands to create an environment for the celebration of their happiness that is less fraught, more relaxed and most enjoyable.