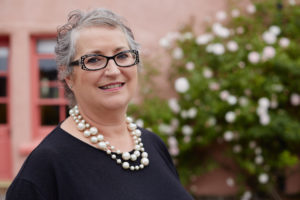 Mary bustled into Barnabrow, perfumed and bejewelled, like a positive charge of delightful energy, about six years ago.  She breathed fire on top of all and exhilarated us in a way that no one ever had before.  I can only think of her in magical terms – my own personal Mary Poppins that descended upon me to fix all my woes, sprinkling Tinkerbell-style fairy dust and, as she moved, creating a shimmering glow.  She did all of that during her third, fourth, fifth round of chemo….we so miss all of that energy now that she is gone.

While my recall might seem somewhat hyperbolic – truly it is not.  She was charming  – had the most seductive phone manner that soothed all of our nervous brides calling from afar, just as she reassured, in a most maternal way, those whose big day fast approached.  She was caring – noticing the shifting moods of staff members and acted swiftly to assuage and help.  The young loved and esteemed her even more than the old.  Quintessentially stylish – she administered constant thoughtful tweaks to Barnabrow and no spider escaped her discerning eye.  She knew everyone, near and far, and seems to have affected the lives of so many in a meaningful way that simply astounded me, as I watched her round up staff, or garner support for some event or other.  She was happy, cheerful, humorous and fun; this was all so infectious – nobody could say no to Mary.

Above all else she counselled me and offered so much good advice, reminding me that there was nothing common about sense.  We battled it out at our Monday planning meetings: she telling me that I was too hard – me telling her that she was too soft.  But I felt the pangs of disappointment when she texted in to say that she could not come because of one side effect or another.  I felt sorrow for her but also for me  – the day was just not as good without her.

Yet these absences were rare because she was so incredibly stoic – a characteristic that she denied – she insisted that she was made that way and it involved no special effort on her part.  In her last months she criss-crossed the country, indeed the oceans too, quietly saying goodbye.  Although probably exhausted she still looked wonderful and she was still smiling.

I miss my Mary Poppins – we all do.  Thinking of her makes me smile now.